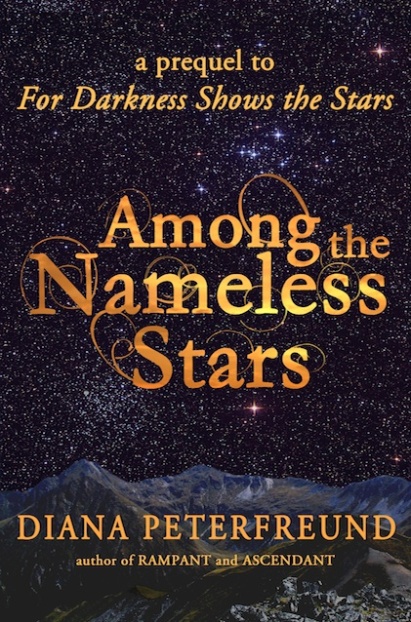 Title: Among the Nameless Stars (For Darkness Shows the Stars #.05)

Before Kai joined the Cloud Fleet, he wandered… AMONG THE NAMELESS STARS

Four years before the events of FOR DARKNESS SHOWS THE STARS, the servant Kai left the North Estate, the only home he’d ever known, and Elliot North, the only girl he ever loved, in search of a better life. But the journey was not an easy one.

I don’t really know what I was expecting from this book but it didn’t really meet it.

I was confused the entire way through. From what I gather their are three levels of people, the high class, the middle class (each have their own names but they arent important), and the lower class called The Reduced. Why they are called this is not explained, though I think they may be on the stupid side. Nothing really is explained, not how the world ended up the way it is, why the ever so strange rules exist, not even half the the words that are used are explained.

I also found it a bit on the repetitive side. This girl Elliot is mentioned many many times throughout at first I thought this was good way to get to know the main character Kai better, know his thoughts and emotions and why he may do things that he does. But its done just way too much. If I knew who Elliot was, had actually met her, maybe this wouldn’t have bothered me so much, but for someone who didn’t even make an appearance in the story it became really frustrating.  The characters are developed well enough despite the confusion though and I would be interested in reading the actual story. I want to read the actual story more to get some answers though.

As for it being a prequel, I don’t really know if you can call it that. I haven’t read the proper story but this one doesn’t really feel like it would have much relevance to anything at all. The whole story could really be told in a couple of paragraphs if he didn’t go into some of the lesser details or some of the people. I would suggest this book to fans of the actual series if they are need for just another little taste of the story.