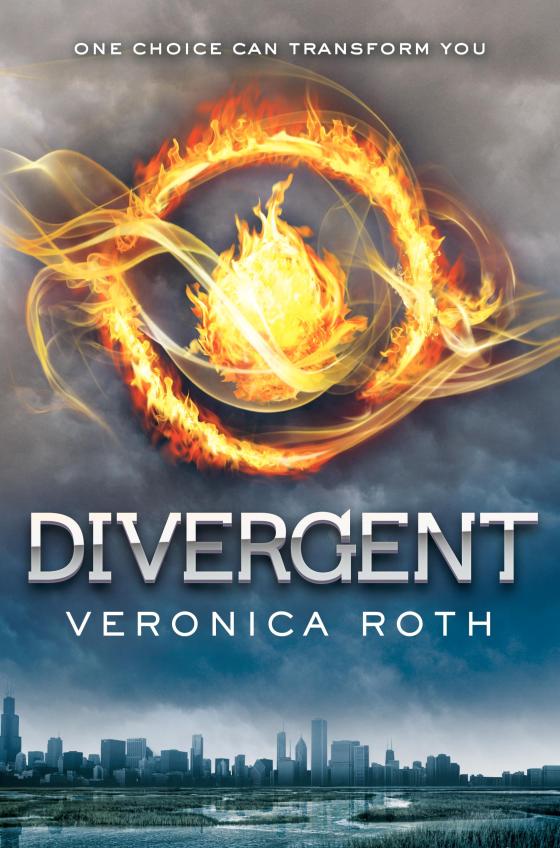 In Beatrice Prior’s dystopian Chicago world, society is divided into five factions, each dedicated to the cultivation of a particular virtue–Candor (the honest), Abnegation (the selfless), Dauntless (the brave), Amity (the peaceful), and Erudite (the intelligent). On an appointed day of every year, all sixteen-year-olds must select the faction to which they will devote the rest of their lives. For Beatrice, the decision is between staying with her family and being who she really is–she can’t have both. So she makes a choice that surprises everyone, including herself.

During the highly competitive initiation that follows, Beatrice renames herself Tris and struggles alongside her fellow initiates to live out the choice they have made. Together they must undergo extreme physical tests of endurance and intense psychological simulations, some with devastating consequences. As initiation transforms them all, Tris must determine who her friends really are–and where, exactly, a romance with a sometimes fascinating, sometimes exasperating boy fits into the life she’s chosen. But Tris also has a secret, one she’s kept hidden from everyone because she’s been warned it can mean death. And as she discovers unrest and growing conflict that threaten to unravel her seemingly perfect society, Tris also learns that her secret might help her save the ones she loves . . . or it might destroy her.

I read this book on my kindle, and I made it all the way through the book without making a single note. I know you guys can’t see my note making habits, but I rely on them heavily. I love my notes and highlights, they help so much when writing a review. This book didn’t receive any because I was so engrossed with what I was reading that I didn’t pause long enough to actually make any. I don’t normally buy hardcopies of books but I have now bought all three in hardcopy form cause I want them to last forever.

I loved Tris. I feel she had quite a bit of character development. People have talked about her being a hard and cold character and I didn’t agree at first at all. But when she moves into her new faction you can see it start to come through and there was one moment with her friend Al that I was like I totally see her coldness now. I love her but I dont know if I would want heras a friend. The poor girl is struggling with herself throughout the entire book because her whole life she has been told that she will fit into one place only and she just doesn’t. She isn’t perfect and she doesn’t really pretend to be and its a nice change. Though in the world she lives she should probably do a better job at trying to seem normal.

Four was a good character but I found a flaw with the way he was presented. His true identity is supposed to be like this big mystery but I worked out very quickly when Tris started questing who he was supposed to be. That being said I don’t think that it was super obvious, I just put the dots together, and I really look forward to getting to really know him in the next book.

The love between him and Tris took pretty much the whole book to happen and I was so glad, It was really a nice side thing that you will get more of in the next book.

I loved Tris’ friends most of the time, they lightened things up and gave me some giggles and some really really heartbreaking moments. Im going to say this, I still like Al at the end of the book. Thats all the you get about him. I dont know if I feel that way about some of the other friends though, some of the things they did were very kind of backstabby and I don’t think the friendships will last long. Oh and Will! Omg Will. Ah. I need to read the next one now because of Will. I also really loved and was moved by her parents. Her mum was awesome.

Her enemies I hated all of them with a passion, I wish they would all just die. But they don’t. I will read on the feel the pleasure of their deaths.

I also thought the world building and plot was very very interesting. I love dystopian books and sometimes you run the risk of kind them being the same because every idea in like nearly every genre has been done already at some point, but I didn’t find that here. Some people have said that they think this is just another Hunger Games, and though I kind of see their point, I think that it is also very different. It does have its own flare and creatures an original concept. Couldn’t get enough.

So yes, loved the characters and the world and everything inbetween. I suggest picking up the book before the movie comes out in the next couple of months. I have high hopes for the movie too!