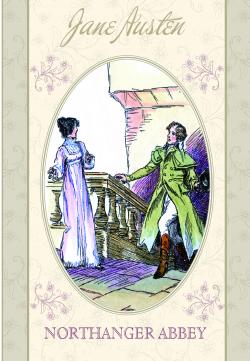 A wonderfully entertaining coming-of-age story, Northanger Abbey is often referred to as Jane Austen’s “Gothic parody.” Decrepit castles, locked rooms, mysterious chests, cryptic notes, and tyrannical fathers give the story an uncanny air, but one with a decidedly satirical twist.

The story’s unlikely heroine is Catherine Morland, a remarkably innocent seventeen-year-old woman from a country parsonage. While spending a few weeks in Bath with a family friend, Catherine meets and falls in love with Henry Tilney, who invites her to visit his family estate, Northanger Abbey. Once there, Catherine, a great reader of Gothic thrillers, lets the shadowy atmosphere of the old mansion fill her mind with terrible suspicions. What is the mystery surrounding the death of Henry’s mother? Is the family concealing a terrible secret within the elegant rooms of the Abbey? Can she trust Henry, or is he part of an evil conspiracy? Catherine finds dreadful portents in the most prosaic events, until Henry persuades her to see the peril in confusing life with art.

Executed with high-spirited gusto, Northanger Abbey is the most lighthearted of Jane Austen’s novels, yet at its core this delightful novel is a serious, unsentimental commentary on love and marriage.

This book was pleasant enough but it left me wanting more from it.

I could tell while reading it that it was her first book. Like I said pleasant and enjoyable, but it was kind of like just having something to pretty to look at much not really providing anything that I could actually take hold or sink my teeth into with much substance. Yes, it has the classic kind of Austen themes about women in that day an age, the way they think and behave and what not, as well as how teenage’s acted then. But I didn’t really take anything away from this story.

It did take me a moment to get into the writing style but once I did it didn’t really hinder my reading all that much. I do think they say things in the longest form possible sometimes and the grand sentences were not always needed, but its not that big an issue.

Our setting of the story is starts off in Bath with our main character Catherine and things move sort of slow while we are here. You meet some good people and you meet some really really horrid people who I just couldn’t stand. John Thorpe was basically one of the rudest and just stupid characters I ever came across. I kind of wanted to shake Catherine for putting up with his disgusting behaviour for as long as she did. His sister Isabella did not start off quite so bad but ultimately proved that she is just a shallow and two-faced person. We also meet Eleanor and her brother Henry Tilney which are pretty much the exact opposite of the Thorpes. I really liked these characters and thought Henry was a bit of a hunk.

Of course, he had me completely won over when he stated:

The person, be it gentleman or lady, who has not pleasure in a good novel, must be intolerably stupid.

All I could think was YES, YES! Specially John.

The story doesn’t really pick up until we move onto the Tilney house called Northanger Abbey. Here Catherine lets her horror book loving mind get the best of her and she starts thinking up and believing the most silly things ever. Like that Henry and Eleanor’s father did something horrible to their mother like kill her or lock her up in a certain section of the house. Its one thing to imagine things like this but its another to actually believe it which is what Catherine did. She barely knew him and really he had only been nice to her until he found out she had no money.

The ending of this book really annoyed me. The conclusion of the love between Catherine and Henry was kind of just like a side sentence at the end and while they ended up together, it seemed really slap dashed to me.

So, if you like Austen I would recommend this book to you just so you can have a look yourself. But I wouldn’t except anything amazing from it.