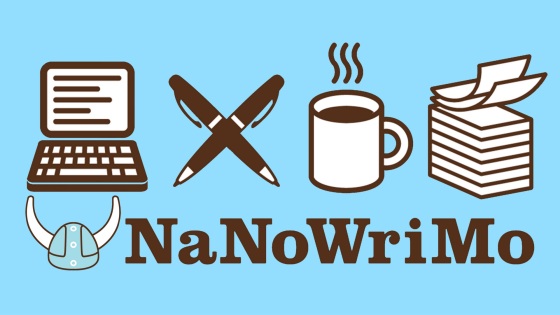 And Nano is off! We are currently on day four and I am really loving everything that is happening at the moment, except for my story which sorta sucks. But before I get into my thoughts lets look at some charts.

Stats from day two as I forgot to take a picture on day one: 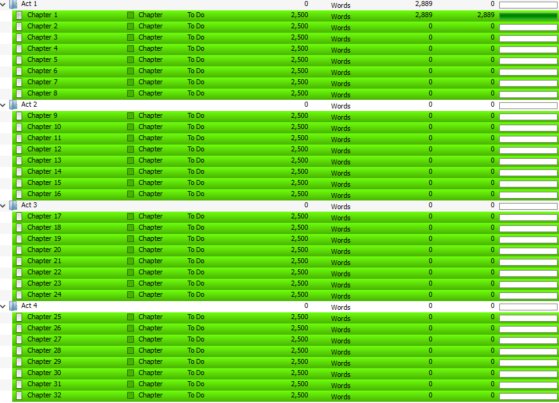 The chapter went on far longer than I intended it too and basically just become a giant introduction dump. All the chapters and general acts are a guess at this point as well. I also changed all the labels after taking this shot so there wasn’t one, because I found all that excess green really distracting and off putting when it came to the goal bars on the side.

Stats from day four at about two in the afternoon and plenty of time to keep writing:

The only reason the day four stats are captured so early in the day is that I wanted to get this post up at a more regular time for myself, and because I am going out to a friends house later so while I have time between now and then I may not do much more writing.

Thus far I have written every single day which I am so proud of myself. When they words are flowing I am truly enjoying the experience. You may see between the two pictures that I moved from trying to write in order to just writing the parts I had a clear image of in my head. This I am coming to find is a result of an insufficient amount of outlining on my part. I am releasing that I may not be cut out to be a pantser. I spent much of yesterday looking up castle designs and floor plans, and even spent some of today sketching things out because I found myself unable to write a scene unless I where everything ever was. I still don’t have a clear idea, but I am trying not to focus too much on the little things and just put words down.

Much of the words I do put down though I am struggling with. Unless its one of the scenes that have been crystal clear in my head since I thought of the idea for this book, the words come out much like pulling out one of my own teeth. This again I relate to my lack of an ability to be a pantser. I have a clear idea in my head of they key turning points in the book, who the villain is and what he does to my main characters, but I just cannot settle on a good reason as to why. I am working with an idea right now that is keeping me moving but I haven’t decided if it is actually enough to have sparked the plot.

Then the things I do get out I just want to go back and change straight away. Chapter one for example, is just a giant here s everyone and all the things you need to know about them all at once. I am unhappy with how the chapter turned out and my mind is just always nagging at me to back and change it and some of the dialogue of the chapter, which I am finding stale because I am not completely connecting with my characters yet. But I know going back and changing things this early on is stupid, specially since I am not set with the driving force to the plot, and I should just focus on getting as much as I can down and setting up something I can go back and work with at a later date.

My mind really doesn’t like it though which is why I am letting myself at the moment just write the parts I am sure of. In writing these out I am hoping I can work out a few things that would have had to come before and once I get the ball rolling the after will come naturally to me. 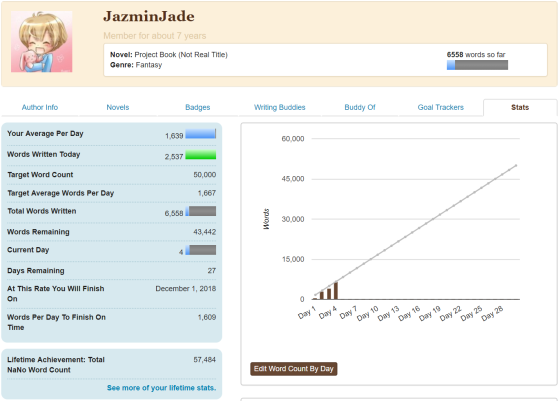 Now as you can see above that I just about a hundred words off of being up to date with the daily  word goals. My work schedules for Monday and Tuesday are full though, and while I might get a couple hundred words in on Monday I am fairly certain that I will not get anything done on the Tuesday. Like I have stated before for other posts on this blog, Tuesday is just a dead day to me. So even though I am going out and I want to write up a review for Kingdom of Ash before I forget too much today, I want to try and get two days worth of words done so that I am not scrambling on trying to keep up too much during the week.

The general amount written each day is also a bit different to what is shown here. I am finding that if I update late at night it counts for the next day even if my day hasn’t ended yet, so I haven’t actually written 2537 words today, though I hope to write more than that.

I think thats all the updating that is required for the day. If you are participating let me know how you are going! I always love seeing other peoples progress and I can always use more nano friends.