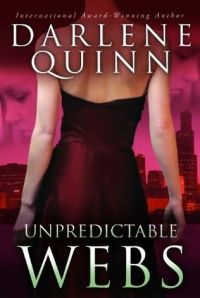 Betrayal, rebellion, jealousy, and a kidnapping gone awry are at the core of this fourth novel in Darlene Quinn’s ensnaring series. Unpredictable Webs picks up the Webs series five years after Twisted Webs.

About to turn sixteen, Marnie Taylor is rebellious–fighting often with her mother, Ashleigh–and jealous of her more even-tempered and popular twin sister, Callie. Lonely, Marnie finds a compassionate listener in Brad, whom she meets online. Spinning a web of lies to throw her parents off, Marnie arranges an in-person meet-up with Brad. But she realizes too late that she has been targeted in a sinister scheme for ransom.

Quinn’s vivid cast of characters returns in this high-tension, stand-alone sequel. Though their actions are plausible, none of them behaves as others might predict in this tale that discloses the darker behaviors people are capable of. Cougar Viviana De Mornay takes Chicago’s fashion world and ”Italian Stallion” Gino Cabello by storm. Tony Wainwright, who has paid his dues for a past crime and appears to have turned his life around, is catapulted to the top of the list of suspects. PI Ross Pocino is on the scene with his surprising insights into criminal behavior, and Paige Toddman’s mother, Helen, seems to grow younger every day. While some mothers can unintentionally do unspeakable harm to their children, Ashleigh’s steel-magnolia efforts to wrest her daughter from her captor redeem the sacredness of that role.

I received this book from the author off of NetGalley and I had serious issues with rating this book. On some levels I felt it needed to be held around the four star mark, but on other ones I felt it required one.

I don’t know if it was just because of the draft I was given to read, but I found the book to be riddled with structural, grammatical, and perspective errors and found myself placing multiple bookmarks along the way for the more serious ones I came across to point out to the author when I give her my review.

The structure of the book has a new chapter pop up every 4 or so pages on average, and at first I found this really rather distracting and it kind of reminded me of walking though a series of small spider webs, as soon as I removed one web I was thrust into another. At first I thought this was because of the constant perspective changes between the many, many characters but later worked out it was not the case because sometimes the author would give someone a paragraph in the chapter, leave a bigger gap between it and the next, then move onto someone else. Towards the end of the book though I rather started to enjoy this very broken up style of chaptering and only became slightly ‘disturbed’ by it when the chapters were longer than normal. I would not think this kind of writing would appeal to everyone however, and you should probably keep it in mind if you choose to try and read this book once its published.

The introduction of the characters was also a bit of a head spin at first because they all got introduced in rapid succession, and I found I had trouble keeping up with all of them, specially if I stopped reading for a bit and came back or with the lesser main characters. At certain points I found myself thinking Oh please no more characters… But after all this introduction if done in the beginning with pretty much everyone, it slows way down and you only get to meet a couple more people towards the end of the book.

If you ignore of that though the story itself was rather enjoyable. I wouldn’t go so far as to say it was ‘unpredictable,’ but you care about what is happening to each character along the way. The character development I found was enhanced by the multiple character view points and rapid changes, because you got to see which personality traits each character picked up/focussed on with the rest of the characters. Some parts confused me with backstory since I haven’t read the first books in the series, but I got enough that I generally got the gist of what was happening/happened between everyone, and I look forward to going back and reading the first instalments.