For those of you who have been reading my blogs for awhile know that I have been to BWF before and have really enjoyed the weekend I spent listening and being immersed in the talks all the authors give. This year was no exception other than the fact that I sadly could only attend two sessions on just one day because life just didn’t line up.

Veronica Roth was the big draw for me this year. If the name for some reason the name doesn’t ring a bell she is the author of the widely popular Divergent series which I loved for the most part, and also the Carve the Mark Duology which I am sadly contemplating DNFing because I am not getting into it. I really wanted to get them all signed though so I gathered up all my books and put them in a bag I hoped and prayed that the rain would stay away long enough for me to get to the venue as it poured down about 5 minutes before I had to go.

I was also praying that there would be a few no shows for the event so that I could even get in to listen to her talk as I had missed out on the free tickets. I was originally planning to go to her evening cosplay event on the  6th after work, but I ended up having to clean for a house inspection on the 7th so I had to miss that and just go with the free event on the 8th. Luckily for me there were a few no shows so I could go in and sit down and listen to the talk, which was amazing and funny, but unluckily for me not so many no shows that there was enough time after for her to sign more than one of everyones books. While I was sad that I couldn’t get everything signed and that I had lugged all of the books with me for no reason, Divergent is the one I care about the most and I got it signed and I am really happy with that. I had a chat with her about how she held a baby echidna and you can see the joy about the discussion on our faces.

Veronica had another author on her panel, Cally black. While I had never heard of her before, I left with one of her books signed. I really enjoyed listening to what she had to say and she really helped make the panel so enjoyable I just had to pick up the book and get it signed. I hope I enjoy it as much as enjoyed listening to her talk and the adorable cupcake counterpart. 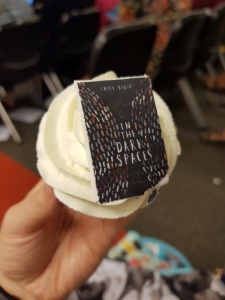 After this panel I stayed for the Alison Goodman panel, and she is the author of Eon and Eona and the Lady Helen trilogy. Eon and Eona have been on my TBR for ages and I was really looking forward to buying them both and getting them signed but of course the book booth wasn’t selling matching copies of the books so I couldn’t have that. I ended up getting the first two Lady Helen books because she talked about the series on the panel and it sounded like something I would be interested in. I am so annoyed though that the last one is not out and it wont be signed like the rest of the them. I have so many signed books, but I don’t think I have a completed set signed. There is always generally one book that doesn’t get signed and I just have to sit here and wait for the author to maybe one day come back. . . I am super happy about what I do get signed though. 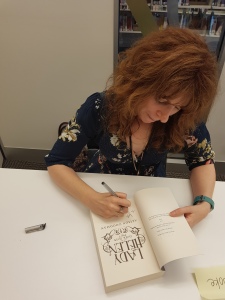 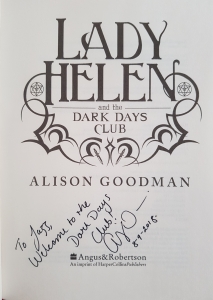 So after that I decided that was enough day for me, I had spent way more money than I wanted to by this point and the amount of heavy books that I had to walk home with was already a bit much before I left the house, and I had now added three more to the pile. The weather gods were smiling down on me though because 10 minutes after I got home, it started pouring down again, and I managed to go out and back without having to hide from the rain with my books.