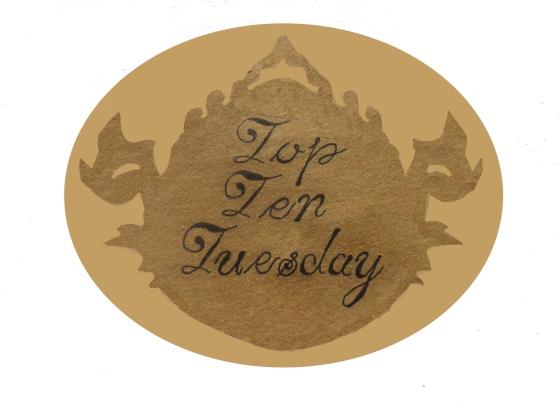 Top Ten Tuesday is a meme created over at Broke and the Bookish where every Tuesday, Top Ten things of anything are listed. Todays Top Ten things are:

1. Use Of Colour. I just love it when covers actually use colours other than black. If they contrast two its just a bonus.

2. Illustrated Covers. I find that these are generally more interesting to me and actually have something to do with the story.

3. Interesting Text Use. Its just so much more interesting if they put effort into it rather than slapping it on there.

4. Old Style Covers. I not only love the front of these, but they also have stunning spines.

5. Simple Covers. They don’t need to be over the top to be pretty.

1. Plain, Huge Faces. I like it when body parts or humans have a twist to their pictures on covers, but when its just the faces it really annoys me.

2. Girls In Dresses. I didn’t mind it at first, but there are too many now. It annoys me most when the girl being in the dress actually has nothing to do with the story in the book.

3. Twilight Inspired Covers. Since twilight did well it seems like publishers think that if the covers all look like those books their books will do well too. I am really just sick of black covers in general too.

4. Half Naked Covers. Its not that I have anything against them, I can generally still read things like this on the bus and not care, I just think they are so ugly.

5. Personal Just Slapped on Cover. I just hate any part of any person on the cover generally. It needs more!

So yes, there we have it. As always I want to see your lists too, so make sure you link me!

Top Ten Tuesday is a meme created over at Broke and the Bookish where every Tuesday, Top Ten things of anything are listed. Todays Top Ten things are:

Top Ten Book Covers I Would Frame As Art

I love this theme. Like so, so much. Yay for art! The images I have selected are based purely on how pretty I think they are, not on if I have read them or even if I like them.

1. Pretty much any cover art for Vampire Knight by Matsuri Hino. The art is stunning, of course I want it on my wall.

2. Of course Alice’s Adventures in Wonderland by Lewis Caroll. I did however find a cover that isn’t an official release for this too which I really wish was real. So I will show that too, its the one on the right.

3. I cannot seem to do a lit without including The Lord of the Rings by J.R.R Tolkien. I can’t wait to get my hands on these books, any of the covers can go on the wall.

4. Im going to cheat and also put in this copy of The Hobbit. I love the red and gold colour contrast.

5. The Secret Garden by Frances Hodgson Burnett. This cover and the standard Trans Atlantic Press cover, its pretty.

6. The Strange and Beautiful Sorrows of Ava Lavendar by Leslye Walton. Its so stunning, I know nothing of the book but I want it because its just so beautiful!

7. The Ring and the Crown by Melissa de la Cruz. Pretty pretty Again, want to read cause its so pretty.

8. The Kingdom of Little Wounds by Susann Cokal. I love the border.

9. The Moment Collector by Jodi Lynn Anderson. This book isn’t even out yet, but look at how nice it looks.

10. Fairytales For Wilde Girls by Allyse Near. Bunny!

Share your lists! I want to see them! Pretty covers should be worth sharing.

If you want a copy of the books displayed here, just click on the cover.