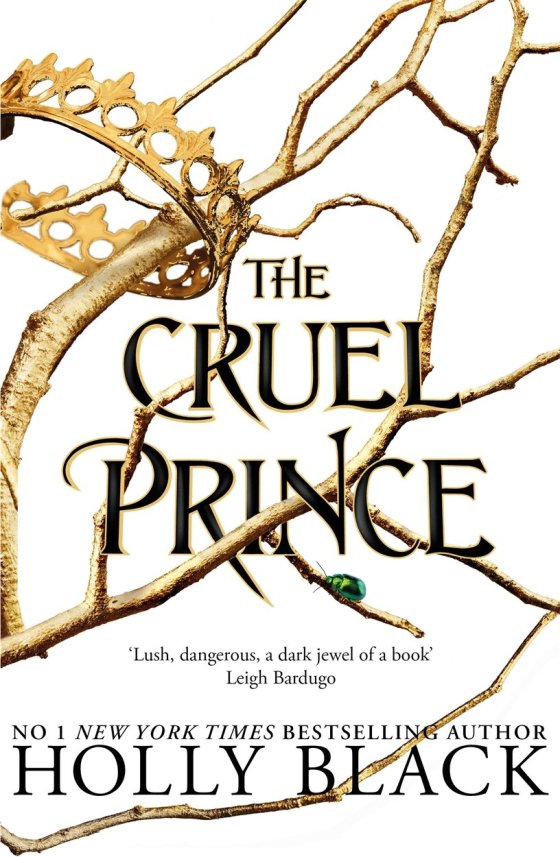 Title: The Cruel Prince [The Folk of the Air 1]

Of course I want to be like them. They’re beautiful as blades forged in some divine fire. They will live forever.

And Cardan is even more beautiful than the rest. I hate him more than all the others. I hate him so much that sometimes when I look at him, I can hardly breathe.

Jude was seven years old when her parents were murdered and she and her two sisters were stolen away to live in the treacherous High Court of Faerie. Ten years later, Jude wants nothing more than to belong there, despite her mortality. But many of the fey despise humans. Especially Prince Cardan, the youngest and wickedest son of the High King.

To win a place at the Court, she must defy him–and face the consequences.

In doing so, she becomes embroiled in palace intrigues and deceptions, discovering her own capacity for bloodshed. But as civil war threatens to drown the Courts of Faerie in violence, Jude will need to risk her life in a dangerous alliance to save her sisters, and Faerie itself.

I can’t quite settle on how to express my thoughts on this book. This might be because I have very mixed thoughts on this book. I went in with rather high expectations. I had heard middle ground to high reviews on the book, and about the author herself. This was my first time experiencing one of Holly Blacks works and while I am now interested in picking up more of her books, I wouldn’t put her on my auto buy author list after completing the book.

No matter how careful I am, eventually I’ll make another misstep. I am weak. I am fragile. I am mortal.

That I hate most of all.

The pace of the plot was a bit mixed. The start of this book was very very slow, so slow infact that for a brief moment I considered dnfing it because it had yet to grab me. I decided to continue on because I had heard good things, and it hadn’t made me angry or started boring me to tears. Once we get to the part where Jude starts playing a larger part in the going ons of court it started to pick up and become more interesting. I am glad I pushed through this first part because the way the book progressed and ended has made me really interested in getting the next book in the series when it comes out and seeing where Black takes it.

I really liked the whole set of the book. The idea of a raging Fae coming and killing his ex mortal wife and her new partner, then taking his Fae child and her two mortal siblings because of some some sense of honour. I liked reading about how Jude, Taryn, and Vivi interacted with Madoc based on this event that brought them together. I also just really liked reading about how Jude had to interact with the Fae in general, living in a world of magic that isn’t really suited to humans. I was really expecting to like Madoc’s character as the book went on but as of right now he is just sort of someone who just there. I might like him later.

What they don’t realize is this: Yes, they frighten me, but I have always been scared, since the day I got here. I was raised by the man who murdered my parents, reared in a land of monsters. I live with that fear, let it settle into my bones, and ignore it. If I didn’t pretend not to be scared, I would hide under my owl-down coverlets in Madoc’s estate forever. I would lie there and scream until there was nothing left of me.

Love interest wise I wasn’t really on board with any of them. I guessed straight away who Taryn’s mystery lover was right away and I can’t say it gave me a very good opinion of her. I know everyone is on the Carden and Jude ship but as of right now I’m waiting to see where the story goes before I get on. I think that there is more depth to Carden than what we really get to see in this book, but I don’t know if I like Jude as a character. I like her interactions with others and I like the role she ends up playing in the general story but she is pretty bloody stupid. Some of the choices she makes and just the way she thinks was rather frustrating.

The thing that finally hooked me into the story was the very ending. The twist that Jude but Carden through I didn’t actually see coming and I am so eager to see how it affects their relationship. If I was Carden I would be really mad and Jude should be a bit worried I think.

If you are a fan of Holly Black I think you will enjoy this book. If you enjoy stories about Fae I think this is one to at least give a try. Get past the very slow start and then you will be left with a very interesting ending.