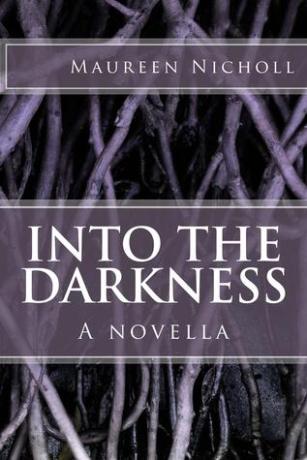 Title: Into The Darkness

A socially awkward mall cop forges an unlikely alliance with a teenage delinquent as a last resort in his desperate search for a kidnapped young woman. The pair must venture onto an eerie abandoned psychiatric hospital campus in pursuit of her captors, battling the darkness of the night and their own demons in an attempt to save the woman before it is too late.

I wond this book on Goodreads and I read this entire book while waiting for centrelink to see me, (something that as supposed to happen at 2:30pm for a booked appointment, but didnt happen until 4pm =_=) so as you may be able to tell its a very small read. It was rather enjoyable read though.

The characters though you don’t really get to know them despite how you judge them based on these 60 pages, are well developed and you grow fond of them. Well at least I grew fond of the two main guys who are the heroes of the novel. I didn’t really grow fond of the girl they run off to save. At the beginning she is all “this is how those stupid women in horror movies die” when she looks around at the situation she got herself stuck in, but she does nothing but made it worst and doesn’t do anything to help herself at all.She placed herself in that “stupid woman from a horror movie” category for me.

The story was enjoyable, but I couldn’t help but feel it was a bit anticlimactic. This was because you pretty much know its going to have a happy ending, there wasn’t really enough of it to feel emotionally involved with the characters you don’t really know. Another things I felt about half way through was that I was just placed at the end of a story, like I was missing the first two sections of the book and was just given the end.

Despite those few things though I was quite happy to go along with the story through its ups and downs. A part a really liked (though a bit gross) was when the author Maureen describes how Ashley, the girl who needs rescuing, peed herself, was forced to sit in it and smelt like pee the entire time (something that gets brought up a couple of times). Details like that aren’t always added in, and of they are they can never mention it again even though im sure the smell of piss isn’t really going to escape anyones attention even if they don’t say it out loud. I enjoyed it because it wasn’t overlooked, and im sure if you were kidnapped by crazy druggies you would probably piss yourself too, so why leave it out of the story?

The author was also very friendly which I just loved. I feel an attachment to the book cause I feel a little bond with the author because she was so friendly :) Se sent me a lovely message over Goodreads congratulating me on the win and to say she would send the book off in the next couple of days, then left a lovely little hand written post-it-note on the covering saying she hopes I enjoy the book. It doesn’t really matter if this is done to everyone who wins, its still nice to see authors go out of their was to be friendly. I would be more than willing to read any other books she publishes due to this kindness.