When an unseen enemy threatens mankind by taking over their bodies and erasing their memories, Melanie will risk everything to protect the people she cares most about, proving that love can conquer all in a dangerous new world.

I don’t remember much of what happened in this movie. This is not because it has been about 2 weeks since I saw the movie (I saw it the night it came out), but thats the way the movie was. I didn’t really remember anything the second I stepped out of the cinema. It was hysterically terribly and completely forgettable.

So why the maybe 3 star? Well if its not so bad that you have been scared for life because of it, then its borderline right? I dunno either… There were seconds in there where I grew really quite angry at the changes they made, despite the fact that I was trying really hard to not take what was happening seriously. When I succeeded in the not taking it seriously, It was hysterical just h0w poorly some things were done.

My friend and I were probably the loudest people in the cinema. We laughed our butts off, and so did other people there who obviously read the book too. I felt a bit sorry for the guy a row in front of me who was obviously taking it seriously and hand’t read the book.. but there was no stopping the hysteria.

It was done better than Twilight I feel, ans this I mainly chalk up to the actors being better than those in Twilight, though I don’t feel that they were well chosen for the characters they were supposed to portray.

For lack of a better word, from the bits that I do remember, the love scenes were a bit… rapey. Everything was over dramatic and most the time it just seemed like it was being forced and at least one of the people apart of the scene was not enjoying themselves. Though this kinda happened in the book, you get info about why and what not which is not offered here. Really they just didnt do the depth of the love issues at all. It was looked over, but I suppose they couldnt do a 600+ book which is pretty much just complete development of the love between everyone they just couldn’t get it in there and tried to cover it up with over dramatic lines that never happened like “Sleep with me!”

I think the most ridiculous thing that happened though was at the end. They are in the desert and Mel and Jared finally get to be together and they go outside to have a happy ‘yay us’ kiss, and it suddenly starts to rain so they can kiss in the rain. All, if there was much, respect for the movie was lost at this point. You already had them kiss in poorly constructed rain scene earlier, the rain didn’t sudden need to happen for this last kiss… completely unbelievable. 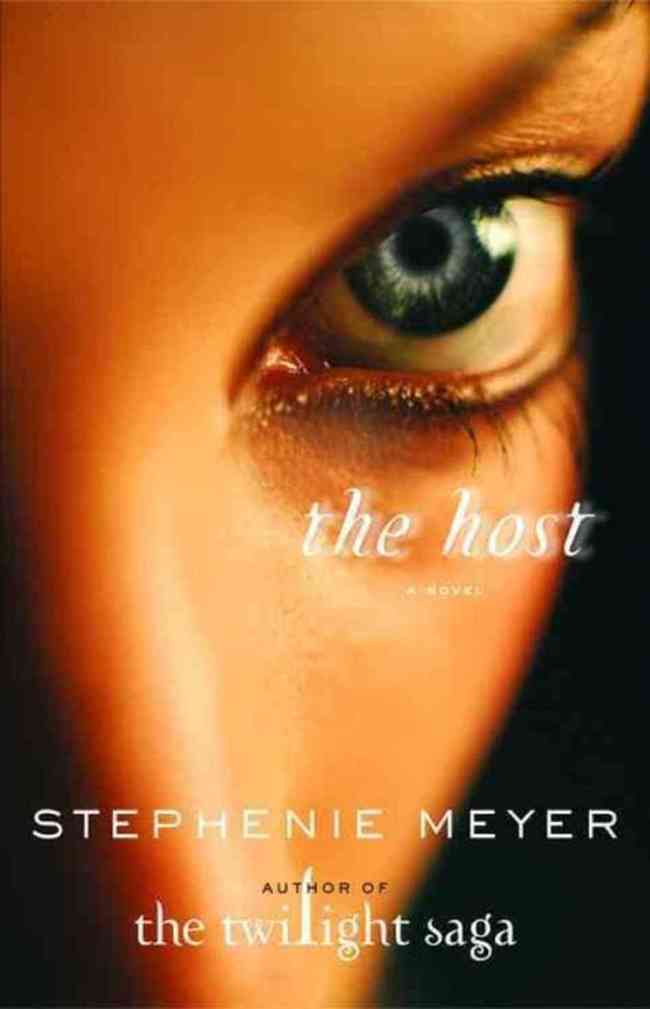 Melanie Stryder refuses to fade away. The earth has been invaded by a species that take over the minds of human hosts while leaving their bodies intact. Wanderer, the invading “soul” who has been given Melanie’s body, didn’t expect to find its former tenant refusing to relinquish possession of her mind.

As Melanie fills Wanderer’s thoughts with visions of Jared, a human who still lives in hiding, Wanderer begins to yearn for a man she’s never met. Reluctant allies, Wanderer and Melanie set off to search for the man they both love.

I have read this book at least 20 times and I still cannot willingly put it down to sleep, I have to pass out while reading. From start to finish you love every word and putting it down feels like having your air cut off until you are absorbing the tale before you once more. Now I know this isn’t exactly a new book, and I should probably be reading other ebooks that I have been sent by authors (if my eyes would allow me), but I thought it was pretty damn important to review the book before the movie comes out. There is really only one point I would like to get across to everyone~

This is honestly one of the best books I have ever read. I know a few of you will be thinking, “Thats the woman who came up with twilight though! I hated that rubbish! Why on earth would I put myself through that again?” Trust me when I tell you, as someone who has read the twilight books as well, they are completely different! She has grown as an author in The Host. The story is much more mature and realistic surprisingly to that of twilight. The story and all its details have been thought through, the characters are full of depth and are well developed, and the story moves at a perfect pace with both slower and calmer moments, and speeding up with the more stressful moments. You don’t find yourself being swept along all the time like you are stuck in the raging flow of a river struggling to keep up and breathe because the flow of the story is just stuck in fast mode.

Stephanie Meyer herself had a pretty good way of describing it on her website, ‘Science fiction for people who don’t like science fiction.’ I find myself thinking this is a pretty damn good way of describing it. Though its from the view point of an alien from a different planet, the whole story is very human because said alien is inside a human body, just like all the other aliens, so the only real difference between the two is the aliens are more gentle and hate violence unlike the actual humans. We do hear about other alien life forms from our main character Wanderer, but we aren’t really thrown into a completely difference life form or reality because the encounters described are just memories. We don’t experience them. You however seriously feel and experience the humans, and Wanderers, struggle with the issue of having to be in hiding, having Melanie stuck as just thoughts inside Wanderers head, and the complex love triangle that happens with 3 bodies and 4 minds. I know everywhere says that is a love triangle with 3 minds and 2 bodies, but that’s really not very accurate. It gets more complicated than just that.

The love that happens actually develops over a rather long time instead of just suddenly happens. Here I’m going to warn of a SPOILER right here, though its not very big. The love that Melanie and Jared share was developed long before Wana/Wanderer was there so it makes sense that it was there when we start reading, but we get glimpses at how it developed. We also get a really good development between the kinda but kinda not one sided love that Wanda also shares for Jared. The best one I feel though is the slow love development between Ian and Wanda, a relationship that started out in pure hatred.

I do have a couple of things that might put people off though. In the beginning you are kind of thrown into the story line and for first chapter or two it can be very confusing. Lots of questions get raised here in situations that we have yet to understand just what exactly is going on, but all answered are revealed slowly over the entire course of the book, and personally I loved this fact, I don’t like it when things are answered straight away. Just a heads up thought that you may be very confused in the beginning. The only thing I didn’t like was and heres the big SPOILER, was the ending. The end of this book kind of has two endings, the one we think is the end, and the one our main character thinks is the end also, the heart shattering and sad sad ending, but it doesn’t actually end there and instead we get a rather ridiculously happy ending. This was bit of a step back in writing and reminded me a tad more twilight. Its seems as though author just had to add on the seemingly forced happy ending. There is a couple of times in the happier ending where the story could have ended also and it still probably would have been fine, not as good as the sad, but not as bad as the overly happy. I wont say more cause I really don’t want to wreck it for anyone, but you should all go read it and see for yourself.

Thoughts on the Movie Trailor

Though I am very glad that they at least seem to be trying to do a far better job with The Host than what they did to the twilight books, I am still filled with doubt. I know that books can’t always be transformed into movies well, and this books wasn’t exactly action packed, so I understand the need to change a few things here and there. I really do. Like casting a tall blonde and strong and confident looking woman for The Seeker, totally get that. The short Seeker in the book wouldn’t exactly be a menacing foe on the big screen. I also get how they have shown more emphasis on the paranormal side, making it look more science fiction in the movie than it ever really seemed in the book. All gotten and accepted and looked forward to. What they have done to the image of the rest of the characters though really disappoints me though… Melanie is nothing like I thought she would be. The actress they chose, Saoirse Ronan, works for Wanda, but not at all for Melanie. Im hoping the fact that the actress is good at what she does makes up for this and proves me wrong. Jared is a so so, I don’t like him, but he is acceptable. But Ian and Kyle? Holly hell, how, just how did they manage to do that horrible set up. They are supposed to look alike, and be big strong men. Neither of those things happened in this casting. They dont look alike AT ALL. The only one I really like is Jeb. Then there is what they are going to be putting in and leaving out that worries me. There is a lot that happens that might not seem important but really is that I’m worried is going to be left out, and I worry they are going to focus too much on Jared and Melanie, and forget about Ian being important. I also don’t know how I feel about them seeming to ignore the rather vast age differences between the lovers… Its kinda important but can they work it so it doesnt matter? Im worried they are trying to hard to aim for the teen fans of twilight…  But I look forward to seeing how they do the Wanda and Melanie connection though seeings as most the conversations that happens is all in Wanda’s head. I also like the soundtrack they chose, it works well. But oh the worries… Will it all be enough? Or will it be another failure that makes me add (the books not the movie) onto my sentence every time I mention it?