Evie has fully come into her powers as the Tarot Empress, and Jack was there to see it all. She now knows that the teens who’ve been reincarnated as the Tarot are in the throes of an epic battle. It’s kill or be killed, and the future of mankind hangs in the balance.

With threats lurking around every corner, Evie is forced to trust her newfound alliance. Together they must fight not only other Arcana, but also Bagmen zombies, post-apocalyptic storms, and cannibals.

When Evie meets Death, things get even more complicated. Though falling for Jack, she’s drawn to the dangerous Endless Knight as well. Somehow the Empress and Death share a history, one that Evie can’t remember—but Death can’t forget.

Oh dear. I had such high hopes for this book and most of them all fell short. I LOVED Poison Princess and I cant express the same feelings for this second book.

A very large section of this book was slow paced. You get sections of action packedness here and there, but it is mostly restricted to the first section of the book. This I think happened because Evie ends up spending alot of time at Deaths place and nothing really happens while she is there. You just get her building relationships with people who live there and thats about it. The bits of action we did get though was great, I loved when they were with the Cannibals and I was really freaking out at certain parts.

And lets just touch on how annoyed I am about the introduction of a love triangle. WHY COLE WHY? I like Death, I think he is a really interesting character and would really like to view quite a lot of things from his perspective, but the fact that the triangle was introduce frustrated me. Now onto a SPOILER I also HATED the fact that Death has such mixed emotions about Evie is because surprise surprise they were married in a previous life and she killed him. I get the life and death are supposed to be together kinda thing but that just blew my mind that that was put in, and not in a good way END SPOILER. Both are left up in the air in a serious way. The ending of the book was not any good at all. Nothing resolved, its just all prolonged.

You get pretty much no Jackson in this book. Once Death comes in he goes. But before all that Jackson’s with Evie is pretty shit house because of things that happened in the book before, things get sorted out, but they take just too long to sort through their rubbish for my liking. Jackson when he is actually caring and being nice to Evie is pretty damn adorable. I also have a theory that I think a lot of people have come to as well. I think Jackson is the last Arcana, the one that is only revealed when they kill another Arcana. It has been set up perfectly. The past between him and the Lovers has been set up perfectly for him to off them and come into his powers, completely get over the differences between him and Evie because there wont be any really anymore (if Death is left out of the picture) and things will end fine and dandy. However there has been thought by others that he is meant to kill my Matthew, to which I think NOOOO! Im glad this seems less likely in my mind because then Evie wouldn’t like him anymore, and she would probably end up with Death instead.

I love the fact that Evie has come into her powers, I think it makes her a stronger person, but I also felt that some of her previous character was left out because of it and that wasn’t a good thing. The whole thing about this Evie is that she keeps her previous personality and thusly pretty much refuses to participate in the games, but then I found that it was lost which annoyed me. I didn’t laugh as much in this book, Evie lost some of her sass and quick wit/bright spirit. I don’t think this was intentional, other things just seemed to take over rather than keeping her character the way it was described to be. I do like though how Cole works through how when Evie uses her powers, she has a hard time remembering she doesn’t want to play the game and just wants to win. I like the struggle.

Though this book fell flat I still am eager for the next one. I hope that Cole has gotten over her malfunctions in this book and the level gets popped back up to its 5 star rating. 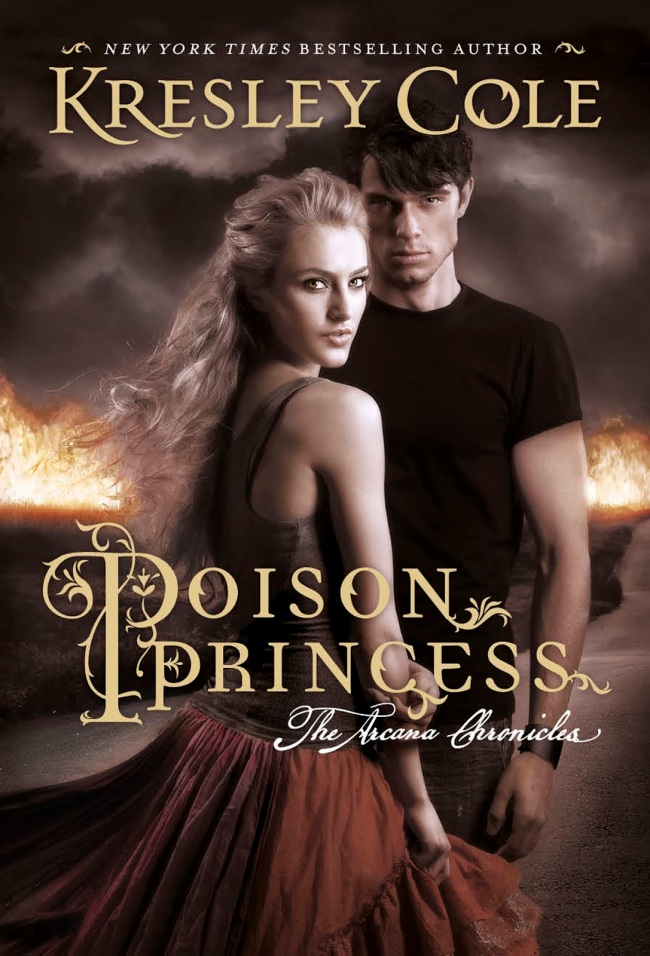 She could save the world—or destroy it.

Sixteen year old Evangeline “Evie” Greene leads a charmed life, until she begins experiencing horrifying hallucinations. When an apocalyptic event decimates her Louisiana hometown, Evie realizes her hallucinations were actually visions of the future—and they’re still happening. Fighting for her life and desperate for answers, she must turn to her wrong-side-of-the-bayou classmate: Jack Deveaux.

But she can’t do either alone.

With his mile-long rap sheet, wicked grin, and bad attitude, Jack is like no boy Evie has ever known. Even though he once scorned her and everything she represented, he agrees to protect Evie on her quest. She knows she can’t totally depend on Jack. If he ever cast that wicked grin her way, could she possibly resist him?

Who can Evie trust?

As Jack and Evie race to find the source of her visions, they meet others who have gotten the same call. An ancient prophesy is being played out, and Evie is not the only one with special powers. A group of twenty-two teens has been chosen to reenact the ultimate battle between good and evil. But it’s not always clear who is on which side….

Just inject this story into my veins.

Oh Kresley Cole, though I love your smut you did have me worried with the last book when you started mentioning things like ‘steaming semen.’ I could tell you wrote the book at certain sections, such as the main character being a confused girl with untapped power (check) and the allure of bad boys with attitude problems (check), but most the book seemed like it was written by a completely different author. Well done! That shows great skill to me. It was amazing to see how much you can focus on creating such a world and the people in it when you dont have to focus on throbbing penises popping up all the time.

Right from the get go I was snagged in the story. I loved the approach of slowly introducing everything and everyone in three different time frames. The 1st, the present after ‘The Flash,’ then through story telling the days before the flash, and finally all the days after the end of pretty much everything that lead our main character Evie to where she is at the beginning of the book. Though I was snagged from the beginning, the second I think I realised that the book was seriously going to hit me was before the Flash even happened. We are introduced to Evie’s best friend Mel at a number of points. After she did something that just made me love her character thinking “My Gods I love Mel,” straight after it was followed by “holly crap and shes totally going to die in the next couple of pages…” That moment right there sealed the book for me. Its one thing to make me laugh (which it did), its another to make me sad. I was seriously depressed and completely heartbroken. There was also another point which nearly had me in tears.

As people will probably work out quickly is that I am never a fan of zombies, which seem to be completely unavoidable when it comes to post-apocalyptic stories, so that was a downfall for me. Though they didn’t call them zombies and they didnt eat brains, they were pretty much the same. They were called bagmen and they were gross slimy creatures that just want to suck up the remaining water from the earth and thusly attack people for the water in their bodies. However I really liked  the idea of people embodying Cole’s interpretation of the Major Arcana Tarot Cards, and gaining power from them and engaging in epic battles that seem to repeat throughout the ages.

Jackson – The only character that we are properly introduced to that doesnt get a card. He probably doesnt need one though because his tough attitude and willingness to beat a man to death kind of helps him live. Im not really all that keen on Jack personally, he had just way too much teen drama going on for my liking, and everytime he said things like “A man has needs and if you dont give them too much ill get them somewhere else” I wanted to slap him. Of course, I wanted to slap Evie more for still pining after him when he said stuff like that to her.

The Empress Card is Evie – Evie is the main character, and I have bits of mixed feelings about her character. I loved the fact that she was a preppy popular cheerleader rather than a quiet girl who doesnt like the spotlight. Through most the book she was fighting and denying her awesome power which lets her control and grow plants, because she doesnt want to become the evil lady from her dreams. But then at the end of the book she has a dramatic change and totally embraces it and the idea of being the evil lady. How quickly this happened didnt work for me, and I found it annoying that she thought that if she practised her powers she had to be an evil person… She could have totally just embraced her powers and used them to put plants back on the earth, rather than using them to rip a guy in half.

Death – He is the big bad that is trying to kill Evie. Though we didnt get as much as I would have liked of him, he is probably one of my more favourite characters. Apparently for the next book he is going to be in the book more because a love triangle forms between him, Evie, and Jacks because past cards have had a love connection between the Empress and Death. I really cant wait to see how that turns out.

The Fool is Matthew – Completely bonkers and completely loveable. I dont know why, but I have a soft spot for characters of the crazy sort. You would be crazy and annoying too if you saw everything, past present and future. He is in my top favourite characters, even though I can completely understand why some of the other characters wanted to hit him. He requires much patience.

The Hermit – His character was slightly annoying to me. His character of being a super bad guy who tortures girls felt just way too forceful. Someone of such a sick personality could easily have been conveyed far better if it was said in less obvious ways without to repetition.

The Moon and The Magician – I didnt really get to know these characters to have much of an opinion of them, though at this time I like the Magician more than the Moon.

Be warned, the book ends on a major cliff hanger and many things go unanswered, and I don’t know if this is an attempt by Cole to make people buy the next book or not, but its going to be really painful for me to wait until October 1st to read the next instalment!