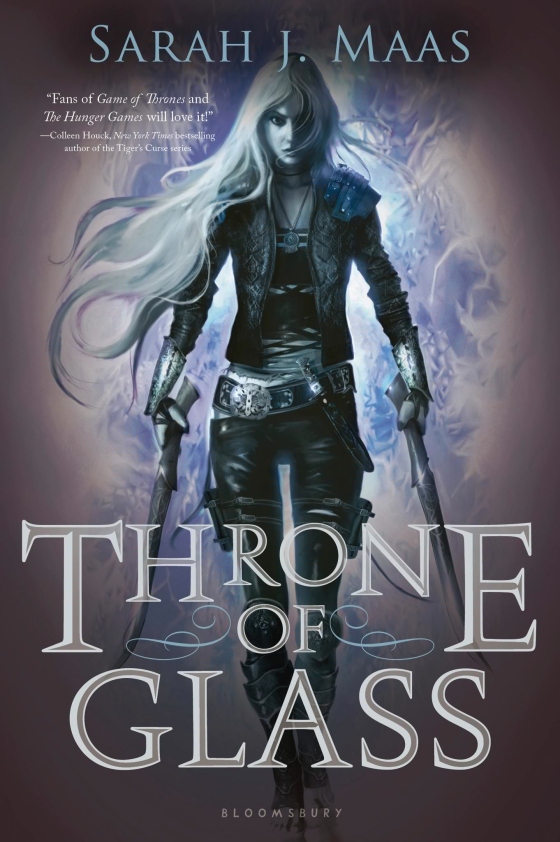 In a land without magic, where the king rules with an iron hand, an assassin is summoned to the castle. She comes not to kill the king, but to win her freedom. If she defeats twenty-three killers, thieves, and warriors in a competition, she is released from prison to serve as the king’s champion. Her name is Celaena Sardothien.

The Crown Prince will provoke her. The Captain of the Guard will protect her. But something evil dwells in the castle of glass–and it’s there to kill. When her competitors start dying one by one, Celaena’s fight for freedom becomes a fight for survival, and a desperate quest to root out the evil before it destroys her world.

The plot of this story was so interesting.We are presented with this snobbish king who has decided to hold a ‘game’ where his royal court companions would each choose a champion to compete and the winner will be the kings own personal assassin for five years and then when their time is over they win their freedom. The kings son Dorian picked Celaena, the worlds most netorious assassin in the world before she got caught. All the trials were so exciting, I loved getting to see what all the different trials were going to entail. Then we also have this interwoven with the magical thats all very hush hush because the king outlawed it. It was awesome. I also loved the fact that we switched perspectives throughout the chapters and were not confined to just Celaena’s even though I love her.

Characters. All the characters were so well written that I feel like I must talk about each of them a bit so I’m sorry if this section drags.

“Guards are of no use in a library.”
Oh, how wrong he was! Libraries are full of ideas – perhaps the most dangerous and powerful of all weapons.

Celaena was an awesome character to read about. There are lots of of awesome female characters these days but my gosh I liked her. She was sarcastic, loved to read, and was tough as nails. Her sense of humour, the fact she devoured books, and how easy she can kill with ease are what I liked about her most. She made herself laugh more than she made others laugh and that was totally hysterical most of the time. She survived a death camp and nearly escaped, a feet that no one had even come close too. They would only get a couple of feet, she touched the damn wall. We see a lot of development with her, both mentally and physically. Since we first meet her after she has been in this death camp she is all week and not what she once was, and with the help of Chaol, the captain of the guard, we begin to see who she was before then. I don’t want to go into spoilers encase there is someone reading this who is silly like me and hasn’t yet picked up the series yet, but I loved all the hints we get about her and the potential she has if she chooses to accept it. I AM ALL FOR IT!

Her arrogance is something that gets her in trouble in the beginning of the book though. Chaol was telling her to play down her abilities because know one expects her to be who she is because of her being female and so young, and if she flies below the radar they wont go after her as badly as some of the others. This is something she doesn’t get at all, which frustrates me because she is supposed to be smart. I do really like that scene though when she is duelling someone who has been the biggest pain in the butt, doesn’t even bother to take out her weapon and just strides up and kicks him ans sends him flying the the arena. It was just so good.

“Here’s a lesson for you Weapons Master,” she said, stalking past him. “Give me real men to fight. Then maybe I’ll bother trying.”

The men in our love triangle are Dorian and Chaol. Dorian is someone I could really get along with. He is a bit full of himself, arrogant, and a bit of a man whore, but is he so funny. There are so many scenes with him that really made the book for me.  The puppy, candy, books, and ball scenes are some of my favourites and they would not have happened if not for him. He is just so open and easy to like. He isn’t living up to his full potential yet but his time will come and its going to be awesome. Chaol is kind of the opposite of Dorian. He is stern, serious, much less open. Not really willing to put himself out there, but does it in a very subtle way that often goes unnoticed. I don’t know which one of them I like more at this point, I really can’t make up my mind. I will say that Chaol was truly amazing by the end, what he did for Celaena meant the world to her. Chaol might be winning a little… Maybe…

There are some side characters that I found interesting. Sam was very interesting and I feel we are missing something huge here that will pop up later, possibly do to with the King of Assassin’s, the person who raised and taught her all she knows with some serious tough love I don’t know how I feel about, and how she ended up in the death camp. Nehemia I was a bit iffy about but came to really like and I hope she helps with the Celaena character development.

The plot was a little bit predictable at times, which was a bit of a downer for me. The ending had some of this predictability to it but my gosh the end scene is stressful. It goes forever and gah. Too long, didn’t need to be that long. I was just dying the whole time.

So yes, read this book. It was amazing, and the fact that I have yet to buy the rest of the books is actaully eating at me and I will probably have to break my book buying ban so that I can have them right now. My heart is literally beating faster thinking about how much I enjoyed this book. Calm down Jazz, calm down.

One thought on “Book Review – Throne Of Glass”