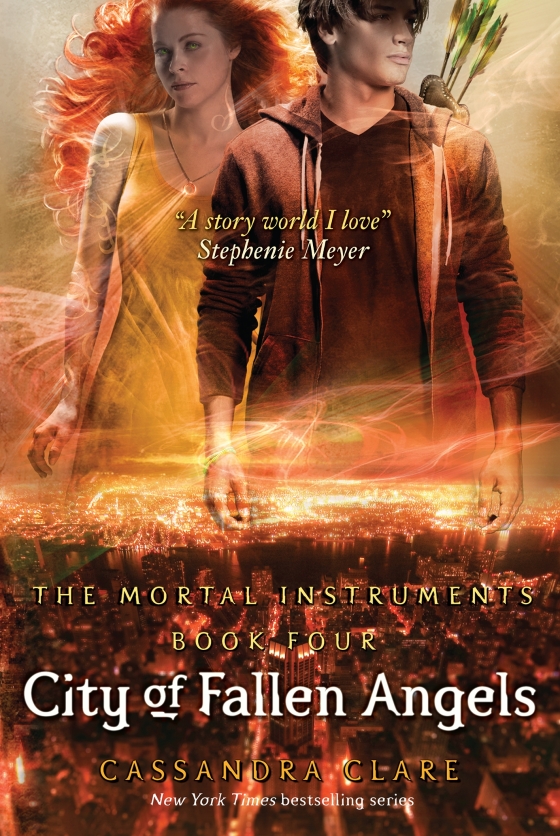 The Mortal War is over, and sixteen-year-old Clary Fray is back home in New York, excited about all the possibilities before her. She’s training to become a Shadowhunter and to use her unique power. Her mother is getting married to the love of her life. Downworlders and Shadowhunters are at peace at last. And—most importantly of all—she can finally call Jace her boyfriend.

But nothing comes without a price.

Someone is murdering Shadowhunters, provoking tensions between Downworlders and Shadowhunters that could lead to a second, bloody war. Clary’s best friend, Simon, can’t help her—his mother just found out that he’s a vampire, and now he’s homeless. When Jace begins to pull away from her without explaining why, Clary is forced to delve into the heart of a mystery whose solution reveals her worst nightmare: she herself has set in motion a terrible chain of events that could lead to her losing everything she loves. Even Jace.

Dang. I don’t know if its just cause after the action of the last book or not, but this one fell soo flat for me. It wasn’t bad, but it does not give me high hopes for the rest. God it should have just ended with the last…

For the first and most frustrating part of the entire book for me. We spend LOTS of time inside Simon’s head. As if this wasn’t bad enough, Clare has decided to try and turn him to some lady’s man because he has ‘vampire mojo.’ What a load of crap. NOTHING about Simon has any mojo. He shouldn’t be able to have any girlfriends let alone two which he is keeping secret from each other. What the hell is wrong with those two? What the hell is wrong with Issy more when she still kind of likes him when she finds out what he has been doing? I lost so much respect for her, it nearly ruined her whole character for me.

In terms of action in the plot nothing much happens until the last third of the book. Because our main bad guy died in the last book, because the series was supposed to be over then, we have to be introduced to a whole bunch more characters and get all their back stories to try and create a new plot. We get so much about new characters that are introduced and so much about our side characters that Clary and Jace really fell to the way side.

Not that I minded that much about this half the time because whenever we did get some Clary and Jace time they were almost always complaining to each other or just completely ignoring the other one. I thought we were passed this rubbish!!!! I like Jace less and less with each book. He needs to get over these issues which he just creates in his own head.

And what is with everyone, and I mean like everyone, suddenly having secrets? Yeah sure some can, but really, does everyone need a deep dark secret or whatever that they need to keep hidden? It made the story over complicated.

Pretty much the thing that made the story for me was the ending of the book. I actually screamed when it happened. But thats all I am going to say on the matter cause I don’t want to ruin the really only good thing about the book for you.

I did really like the fact that Clary started doing Shadowhunter training. It was interesting to see her try and better herself this way. Perhaps she will learn to be less silly now that she is getting training in it.

If this had been the first book for the series I really don’t think I would pick it up and read the rest of them. I was interested in the ending because I already knew and loved the characters and everything that happened before. It I had just come in on this book it wouldn’t have worked for me. Apparently it gets better from here on out, so those reading along don’t worry too much. Keep reading.

One thought on “Book Review – City Of Fallen Angels”